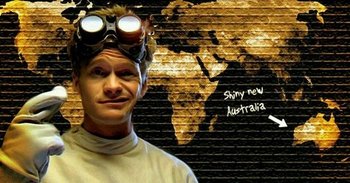 What girl could resist?
"And she may cry but her tears will dry
When I hand her the keys to a shiny new Australia!"
— Dr. Horrible, Dr. Horrible's Sing-Along Blog, "Brand New Day"
Advertisement:

Say the Big Bad is about to Take Over the World, but you have something he needs. What would you ask for in return for your help? And you can think big; after all, he does have the entire world to offer, no need to feel constrained to beg to be spared.

Or maybe you are the Big Bad, and some wannabe villain has some vital piece of Applied Phlebotinum you need to see your evil plan through, but not the means by which to carry it out himself. What could you offer him to get what you want, and even play to his ego so he won't think to stab you in the back and take your hard-earned godhood for himself?

And even if you already have everything you need to carry out your secretive Evil Plans such as Corporate Conspiracy and Government Conspiracy, nothing says you care quite like promising your most faithful minion a good-sized piece of the planet he's about to help you conquer. Whatever the case might be, there is one thing every would-be world dominator needs to ensure that their plan is foolproof and no untoward betrayals go off in the last five minutes of their doomsday clock:

That's right, Australia. Australia isn't a global powerhouse, but is still an enormous piece of real estate, so the Big Bad can make it look like an impressive gift while keeping his mitts on the more important countries like the US, the UK, Russia, China, etc. Australia's dreaded military will also provide the Big Bad more firepower, and an opportunity to own them as Mooks and possibly turning them into Private Military Contractors. Also, it has 25% of the uranium in the world and is the largest exporter of beef by... quite a large margin. There are also a lot of reasons it's the perfect base of operations for a junior supervillain, though this may itself be a good reason the Big Bad should rethink giving it to said ambitious subordinate. Even then, these villains would masquerade their intentions in order to lure unwitting citizens and visitors into their Propaganda Machine and Peace & Love, Incorporated.

It doesn't actually need to be Australia. Any big chunk of territory will do, as long as it makes the junior supervillain a powerful ruler, often while leaving the senior one a much more powerful ruler. See also Throw-Away Country.

Examples with other places: