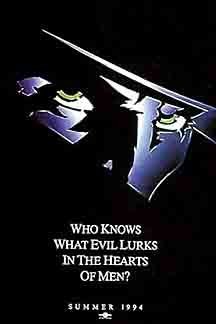 A 1994 Universal live-action film directed by Russell Mulcahy and based off the pulp hero The Shadow, the movie follows the adventures of Lamont Cranston (Alec Baldwin), who uses his psychic powers as the Shadow to hunt criminals in New York City to make up for the atrocities he committed in the past. But all is not well in the Big Apple - Shiwan Khan (John Lone), the last descendant of Genghis Khan and fellow psychic, has come to finish his great-grandscestor's work, and he's not about to let anyone stand in his way. Margo Lane, Lamont's love interest, was played by Penelope Ann Miller, while her father, physicist Reinhardt Lane, was played by Ian McKellen.

There was a novelization by James Luceno that valiantly tries to tie the movie into the pulps and radio series. The makers were hoping to start an entire new superhero film franchise but the film performed poorly at the box office and the franchise was stillborn.

No relation to the Hans Christian Andersen story of the same name.