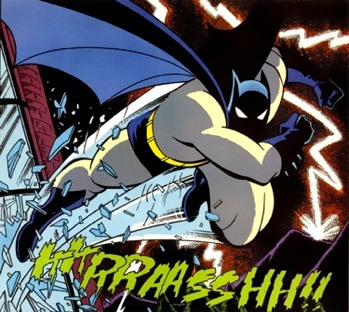 He does this all the time.
"Attention mafia types. Stop hanging out in buildings with skylights. They'll only get broken."
— Chris Hastings, The Adventures of Dr. McNinja, Issue 3 Page 6

The modern spin on the Sheet of Glass. Simply put, to get to or from the scene in a hurry, they jump through a window; a closed window. The shards of glass flying everywhere make it very dramatic.

Supernatural beings (especially vampires) love doing this. Humans can do it too but usually have the benefit of a motorcycle taking the impact. Ninjas, certain dark superheroes, and Special Forces do it via skylights from the ceiling, the latter normally using rope.

The power of the supernatural, body armor, being Made of Iron or Nigh Invulnerable, or dramatic entrance/exit is required to prevent one's skin from being torn to ribbons by this maneuver. Wrapping a cape or long jacket around yourself in a tumble helps too. In television and film, this visual effect is achieved thanks to using carefully crystallized sugar to stand in for glass. Needless to say, trying this with a real-life window can get you killed, since not only is non-Hollywood window glass tougher than you'd think, there's also all the lacerations you'll get from large shards, no matter what protective clothing you may be wearing - Don't Try This at Home.

Truly cool people never need to use the door. May cause an Impact Silhouette. See also Soft Glass, compare Dangerous Windows. Compare Fast-Roping and Crash in Through the Ceiling. Contrast Destination Defenestration, where someone is thrown through a window against their own will. A sub-trope of No Escape but Down (when used to exit the scene) or Big Entrance (when used to enter it). Not necessarily related to The Window or the Stairs, despite the name.