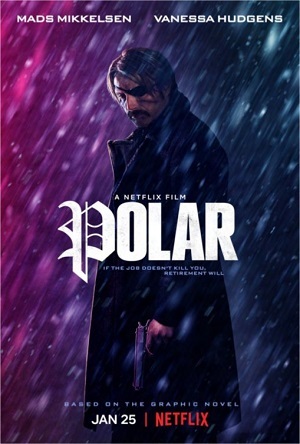 Polar is a film adaptation of the action noir comics series of the same name. It is directed by Jonas Åkerlund and stars Mads Mikkelsen, Vanessa Hudgens, Katheryn Winnick and Matt Lucas.

Duncan Vizla (Mikkelsen) was the world's most deadly assassin, being known in the trade as the Black Kaiser, until he retired to a quiet life in the countryside. But just as he is settling into retirement and getting acquainted with a young attractive neighbor (Hudgens), his former employer decides to mark him as a liability. Against his will Vizla finds himself back in the game, going head to head with an army of younger, faster, more ruthless killers who will stop at nothing to kill him.

It premiered on Netflix on January 25, 2019 and the trailer can be seen here