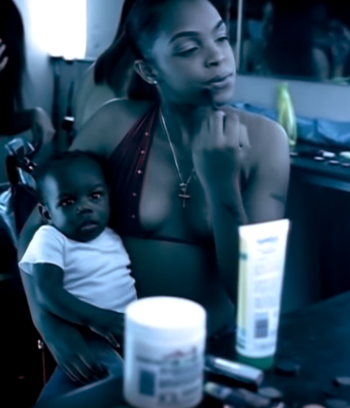 "What would you do when your son's at home?
Crying alone on the bedroom floor
And he's hungry
And the only way to feed him
Is to sleep with a man for a little bit of money?"
— City High, "What Would You Do?"
Advertisement:

Your nasty husband has cheated on you and left. Or maybe you're an unwed teenager, and you chose to carry to term, but you had to drop out of school due to your pregnancy, your very traditional parents threw you out onto the streets once your pregnancy started showing, and the baby's father is completely out of the picture. Or maybe your husband died, he was the primary breadwinner, and you've been out of the workforce since you got married. Or you're a single mom, and your Pointy-Haired Boss fired you for a crappy reason (or no reason at all). Regardless, you're out of work, you've got a baby to feed and you're one missed rent payment away from being out on the streets.

You realize that the boys at school really liked you. Maybe you could make some quick fast cash waiting tables--in a bikini. Or pole dancing. Or going all the way, if needed.

May be a Hooker with a Heart of Gold or a Junkie Parent. The children might be treated as a Son of a Whore, whether or not actual prostitution is involved. May also be used to give the Disposable Sex Worker a sympathetic backstory. Compare with Justified Criminal. Usually results from Struggling Single Mother.