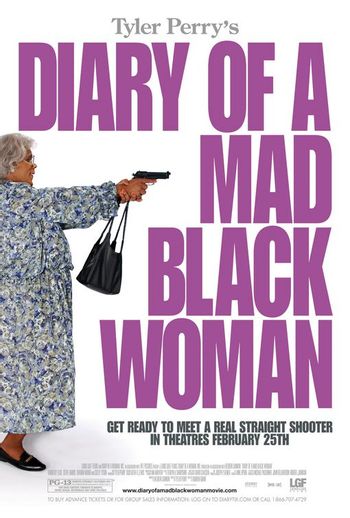 Would you believe that this was based on a Christian-themed play?
Advertisement:

A 2005 romantic dramedy film directed by Darren Grant and starring Tyler Perry, adapted from a stage play of the same name.

Helen (Kimberly Elise) and Charles McCarter (Steve Harris) had everything: fine home, beautiful clothes and success. In public, they were the perfect match. But behind the scenes was another matter. On what should have been the end of the happiest day of their lives, Charles evicts Helen, his wife of 18 years, from their house in the presence of his mistress. She moves in with her grandmother, Madea (Tyler Perry). Helen then goes from meek and mild to mad, starts a diary and a new life, and meets a new man, Orlando (Shemar Moore).