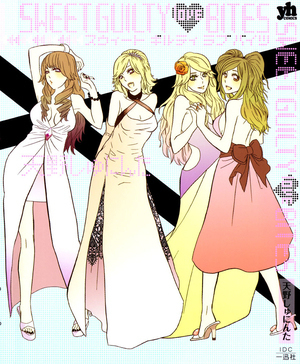 Sweet Guilty Love Bites is a short, three-chapter Yuri Genre manga by Shuninta Amano, which was serialized in Yuri Hime in 2010. Each chapter focuses on one of three very different lesbian couples, united only by the fact that at least one partner in each pairing works as a hostess at the cabaret Club Rose. Each couple gets a chapter in the trilogy:

Tropes found in the manga: