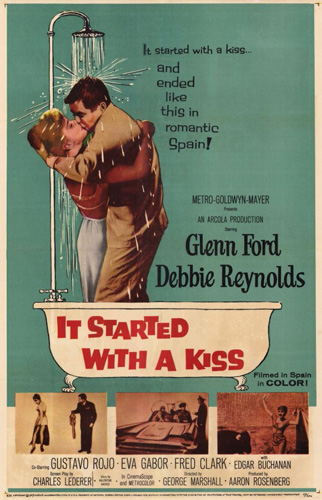 Then One Thing Led to Another...
"Shower sex is always an explosive orgasm machine in movies. In real life, shower sex invariably results in both parties emerging insufficiently washed and sexually unsatisfied."
— Nathan Rabin, reviewing

Two people have sex under a running shower. Since shower windows have a tendency to get steamed up, this allows for literal Censor Steam. Sex against the wall is a possibility, but there is the likelihood of injury from slip and fall (which hardly happens in fiction, unless one was to write a romantic comedy that puts a realistic—and painful—spin on this trope).

Often an example of Idealized Sex.

See also Shower of Angst (when a character showers to wash away shame, misery, and/or embarrassment), Shower of Awkward (when Hilarity Ensues — or Unresolved Sexual Tension rises—when one character walks in on another showering and freaks out over it, or someone flushes the toilet), and Shower Scene (Exactly What It Says on the Tin).