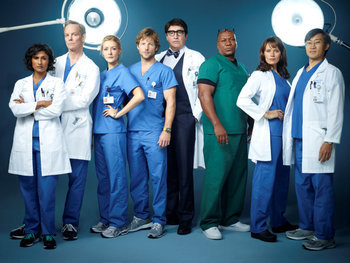 Monday Mornings is a Medical Drama airing on TNT. Created by David E. Kelley and based off a novel by Sanjay Gupta, it debuted Febuary 4, 2013.

The series follows the personal and professional lives of the doctors of the fictional Chelsea General Hospital in Portland, Oregon. The title refers to the Monday morning meetings where the Chief of Staff, Dr. Harding Hooten (played by Alfred Molina) tells the doctors exactly how they screwed up over the course of the week, so that they may do better in the future.

The first season had 10 episodes only, and struggled with ratings during its entire run. However it managed to intrigue Medical Drama enthusiasts and create a dedicated following. In May 2013, TNT announced that they would not renew the show for a second season.