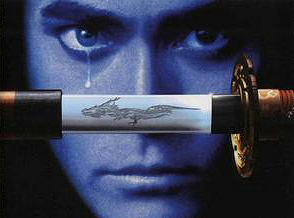 For whatever reason, a character is moved. But this guy is made of strong stuff: He is beyond blubbering and won't turn on the waters works. He dammed up the Sparkling Stream of Tears and had his Ocular Gushers surgically removed. And he promised himself! He is not going to cry.

A Single Tear happens any time someone (man or woman) cries only one teardrop. If a being is generally incapable of crying, this is a sign that he is genuinely upset. The tear can be shed for anything, from patriotism to pollution, but the more traumatic, the better.

Compare with Manly Tears, which can often overlap with this.

One reason for this is that it's difficult even for actors to cry on command, so filmmakers sometimes use an eyedropper to put liquid in the actor's eyes just before a crying scene. Of course, you can only squeeze so much water out before the next take, leading to this. Also shows up frequently in animation, because it's easier to animate. It's actually older than film, though: Dante mentions it in The Divine Comedy.

Not quite a Discredited Trope; lots of examples are parodies, but there are still many, many works that play it straight.