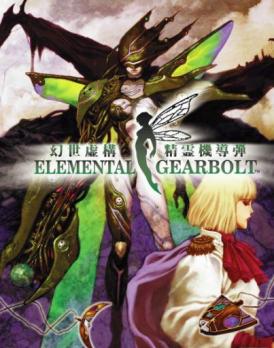 Purposed to Perish
Elemental Gearbolt is a PlayStation Light Gun Game that was developed by Alfa System in 1997 and localized by Working Designs in 1998. It defies a number of light gun genre conventions simply by telling a pretty effective tragic fantasy story. And then caps it off with exceptionally atmospheric music and art.
Advertisement:

The game opens with a scene of a ruined city and a person dressed in black who's trying to figure out what happened. It turns out that the trouble began when two dead girls were suddenly transformed into implacable magical war machines. In a nutshell, they tear across the countryside, destroying a Well-Intentioned Extremist prince's advanced technology and spoiling his Assimilation Plot. Everyone dies; the end.

Let's get a bit more in-depth. The game world is rife with Fantastic Racism. The Sulunakan, a race of peaceful Magitek masters, are oppressed by Audo overlords who invaded their world long ago. The Sulunakan do fight back, but they are no match for the Audo. In a chance meeting, Bel Cain, a young prince (secretly a half-breed,) meets Nell and Seana, half-breed daughters of a Sulunakan resistance leader. They promise to meet again, but they never do (in the strict sense, at least).

Years later, Bel Cain becomes crown prince and resolves to create a new world order with super advanced Magitech, all managed by a computer made from human brains. Bel Cain doesn't realize that the computer hates its existence so much that it has created weapons capable of finding and destroying it... using the corpses of Nell and Seana (who joined the Sulunakan resistance only to be killed and taken as trophies). The things that used to be Nell and Seana they tear across the countryside, destroying Bel Cain's advanced technology, culminating in a sad, one-sided reunion... and they all die.

But wait, there's yet another plot layer to be found in the game's unlockables which casts the events of the game in a different light. A different light of forbidden knowledge, eldritch abominations and shadowy extra-dimensional organizations... and the possibility that maybe not everyone died after all.