Film / The Last King of Scotland 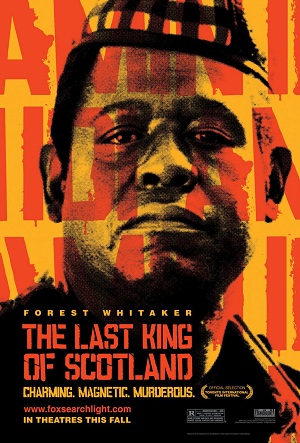 "I am the father of this nation, Nicholas. And you have most... grossly... offended your father."
— Idi Amin
Advertisement:

The Last King of Scotland is a critically acclaimed 2006 Film of the Book which fictionalizes the rise and fall of Idi Amin (Forest Whitaker), the infamous dictator of Uganda.

The movie starts in 1970 with Nicholas Garrigan (James McAvoy), a callow Scottish medical graduate. In rebellion against his father, he goes to work as a doctor in Uganda. While working in a missionary hospital and being hot for the married Sarah Meritt, he meets Idi Amin, a charismatic general who is so impressed with him that he appoints him to become his personal physician. The worst that can be said about this coup leader is his increasing paranoia that everyone is out to get him and the bad dreams suggesting when he's going to die. Plus, he farts big just like the rest of us. He's an alright dude.

Unfortunately, Idi Amin soon descends from a smiling, wide-eyed man of the people to the butcher history will remember him as.