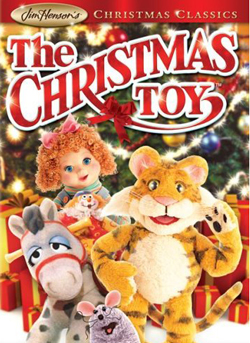 Feeling nostalgic yet?
"The special centered around a group of toys that come to life when humans leave the room, and one toy having trouble coming to grips with the fact that he will no longer be his child's favorite. This might sound familiar."
—Kevin Perjurer, Defunctland, "DefunctTV: The History of Muppet Babies"
Advertisement:

The Christmas Toy is a 1986 made-for-TV movie by The Jim Henson Company. It originally aired on ABC on December 6, 1986, and was sponsored by Kraft Foods. Originally introduced by Kermit The Frog, it was released on VHS format in 1993. In 2008 it was released on DVD. However, Kermit's appearance was edited out due to legal issues. It was shown occasionally on The Hub before that network's re-branding.

The story follows the idea that toys love to play so much that they will do it even when their owners aren't around. But if any person catches a toy out of position, that toy will become permanently inanimate — "frozen forever" in toy lingo — so they have to be very careful.

It's Christmas Eve, and Rugby Tiger — last year's Christmas Toy — thinks he's going to go under the tree to be unwrapped again. Apple the Doll, whom Rugby supplanted as favorite toy, tries to set him straight, but Rugby won't believe her and sets out on the dangerous expedition to the living room. Unfortunately for him, opening "his" box releases the current Christmas Toy: Meteora, Queen of the Asteroids. She's a warrior princess who doesn't know she's a toy and thinks she's landed among aliens. (Does this sound familiar?) It's up to the other toys to get Rugby out of the box — and Meteora back in it — and everyone back to the safety of the playroom without getting caught out of place.

Eight years later, the special was recycled as Secret Life of Toys. It lasted 13 episodes (with a Two Shorts format) and retained some of the special's performers. It changed the setting to a UK child's playroom and notably replaced a few characters with new ones.note Instead of Apple, Rugby was mild frenemies with a much simpler looking doll named Raisin, for instance, and the male scooter horse Belmont was replaced by a female rocking horse named Hortense.

Followed by A Muppet Family Christmas in 1987, with The Christmas Toy being included as a bonus feature on its 2003 home video release.