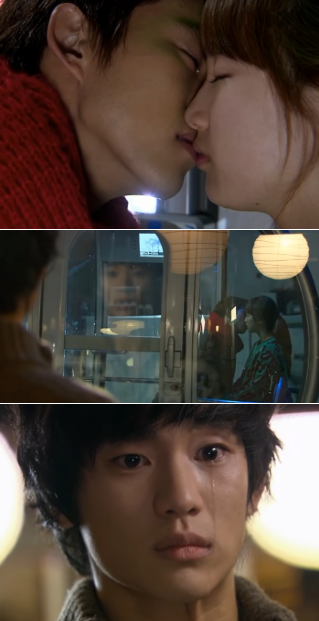 I can see you standin', honey
With his arms around your body
Laughin' but the joke's not funny at all.
— Bon Iver and Taylor Swift, "Exile"
Advertisement:

Being in love can be hard, mostly for one reason: There's no guarantee your crush will feel the same. Indeed, in fiction, it's far more likely that you'll at least have to deal with a Love Triangle or two before you can be happy, but the rule with a love triangle is that they run on drama and angst from all characters involved. One easy way to add some tragedy is for a love-struck character to be an unwilling witness to their love and their rival doing anything from flirting and blushing, to outright doing the dirty.

This is almost always Played for Drama. The witness is usually the protagonist or a character whose insecurities are already familiar to the audience, making the sting that much more painful. A particularly nasty rival will subject them to this intentionally, especially if the triangle is between the Cool Loser and the Alpha Bitch. Other times, the lovers won't know they're being watched, making it less malicious but still hurtful for the watcher. In all cases, it's a slap in the face to the witness, who will more than likely use this moment as proof that they've "lost" the love competition. Expect tears to follow...or a Green-Eyed Epiphany, if they react with jealousy rather than anguish. If the jealousy is the intended reaction, it's Operation: Jealousy. All that said however, antagonists can be on the receiving end too, which will either be seen as fitting karma or an explanation for their bitterness later on.

While this is usually reserved for characters who aren't already dating, established couples can have scenes like this, especially if someone is attempting Relationship Sabotage. In cases like these, it shows that the relationship is shaky or plagued by doubts and jealousy. Secure partners are more likely to break the moment up or shrug it off, while an insecure partner would internalize it and see it as a sign of trouble to come. These cases can also be entirely platonic, with the witness interpreting them as something more; this variant has overlap with Mistaken for Cheating, Not What It Looks Like, or even Relative Error.

Non-consensual moments only count if the lack of consent isn't immediately obvious to the witness. A tricked or brainwashed love-interest, for example, may play into the flirting without actually wanting to. A victim of blatant sexual assault, on the other hand, is very obviously not in control of what they're doing, so the impact comes from a different source. Beyond that, the extent of the "flirting" is quite broad, as this trope is more about the reaction and impact rather than the lovers themselves.

"Relax, it's probably nothing"

Patricia and Nina both watch their crushes spending time with other girls, and react with equal amounts of jealousy.

"Relax, it's probably nothing"

Patricia and Nina both watch their crushes spending time with other girls, and react with equal amounts of jealousy.