Film / The Tale of the Bunny Picnic 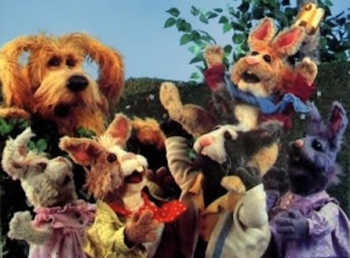 The Tale of the Bunny Picnic is a 1986 television special created by Jim Henson and aired on HBO in the United States and BBC in the UK. It introduces the character of Bean Bunny, who would later go on to make appearances in several other Henson-related productions. Henson got the idea for the movie when he and his daughter were in a park and saw a dog chasing rabbits. Afterward, Henson decided to make up a story about bunnies being afraid of dogs.
Advertisement:

The story concerns the annual Bunny Picnic, which the rabbits of the forest hold to celebrate the coming of spring. Young Bean is deemed too little to help his older siblings Lugsy and Twitch with decorations, and so he wanders off, and encounters a (seemingly) ferocious dog in the lettuce patch. When he runs back home, no one believes his story, least of all Lugsy. Everyone insists there haven't been any dogs in the woods for years. Bean, though, is determined to prove he's right. And in so doing, he just might save the Bunny Picnic... because the dog is actually the pet of an evil farmer who wants the bunnies to put in his stew!

The special features songs written by Dennis Lee and Phil Balsam, best known for their concurrent work on Fraggle Rock, and Fraggle fans will easily recognize Bean's voice as Wembley Fraggle's (Steve Whitmire). One of the lesser known works in the Muppet pantheon despite being rerun on HBO a few times after its initial airing and the short-lived Breakout Character success of Bean Bunny, it has yet to be released on DVD, but the VHS version (which removes Henson's introduction) is available to view in its entirety on YouTube.

Alternative Title(s): The Tale Of The Bunny Picnic