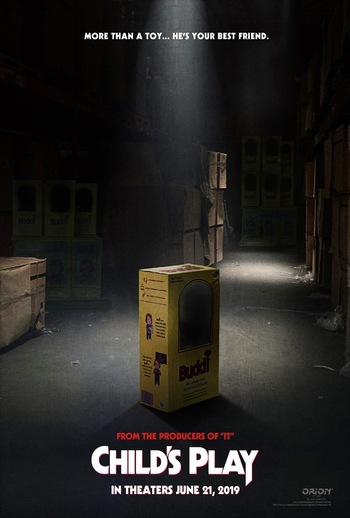 It's time to play in a whole new way.
Advertisement:

Child's Play, also known as Child's Play 2019, is a reboot of the slasher series Child's Play with a more modern-day take. It was announced back in July 2018 and was released the following year in June 2019 by Metro-Goldwyn-Mayer, due to them still having the rights and concept to the original film.

The film does not involve Don Mancini and Brad Dourif, the voice of Chucky, with the latter being replaced by Mark Hamill. The movie also stars Gabriel Bateman as Andy, Aubrey Plaza as Karen and Brian Tyree Henry as Detective Mike.

In the midst of electronics conglomerate Kaslan launching their most ambitious endeavor to date, a technologically advanced line of dolls under the name of Buddi, 13 year-old Andy Barclay struggles to fit in to his new surroundings after he and his mother Karen move to Chicago. Hoping to lift her son's spirits, Karen manages to obtain one of the dolls for Andy as an early birthday gift. The doll, naming himself Chucky, becomes fast friends with Andy... but it isn't long until Andy realizes that there's more to Chucky than it seems. A little too much more.

People, let me tell ya 'bout my best friend...