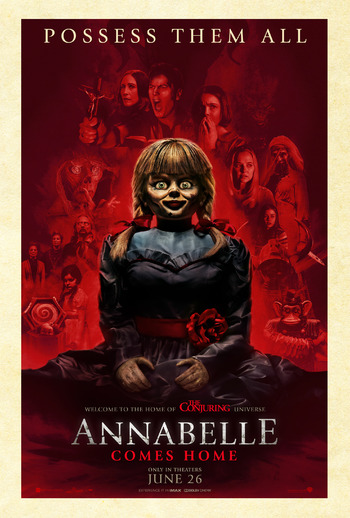 "It’s the doll, Ed. It’s a beacon for other spirits."
Daniela: So, Judy, don’t your parents, like, keep any creepy stuff around?
Judy: No. They keep it all locked away in a room.
Daniela: Well, can we at least go in and look?
Advertisement:

Annabelle Comes Home is a horror film and the seventh entry in The Conjuring Universe. Chronologically, it is an Interquel and mostly takes place between The Conjuring and The Conjuring II. It is the directorial debut of Gary Dauberman, who previously worked as screenwriter of three films in the franchise and also co-wrote this film with James Wan. It was released on June 26, 2019.

After taking Annabelle from a pair of nurses, paranormal investigators Ed (Patrick Wilson) and Lorraine Warren (Vera Farmiga) place the cursed doll inside a glass box in their occult museum. Sometime later, they leave behind their daughter, Judy (Mckenna Grace), to be cared for by a babysitter, Mary Ellen (Madison Iseman), and her friend, Daniela Rios (Katie Sarife), while they are away on a case. Daniela, who has recently lost her father, becomes interested in the museum. As a consequence, Annabelle begins terrorizing the girls by making the rest of the museum's artifacts come alive.