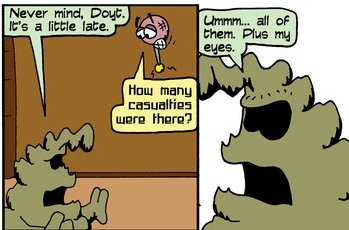 Over 100% casualties!
John Connor: We got company.
Miles Dyson: Police?
Sarah Connor: How many?
John Connor: Uh, all of them, I think.
— Terminator 2: Judgment Day
Advertisement:

A Stock Phrase joke used to indicate that giving a number, even a vague estimate, would be pretty useless at this point—yeah, the entirety of Europe just stormed your base. Commonly overlaps with a This Is Gonna Suck/Oh, Crap! moment, or comes just before or after one.

Note that this trope is a joke, normally in response to a question that would usually be answered with a number or category. If a character is asked, "How much cereal did you have?" and they show one empty box and say "All of it", that's not an example. If, however, they show a pile of empty boxes as tall as the house? That's funny. Very rarely, the literal meaning can be used to invoke sheer implausibility, such as having literally every single cop in the world raiding your house, and this also counts.

Compare Gonna Need More X, another trope about situations involving overwhelming quantities. Compare with Readings Are Off the Scale for a similar non-quantitative answer from a gauge. The Low Count Gag is an inversion—you say "all of something" amounts to a mere one or two units.

Alternative Title(s): How Many All Of Them