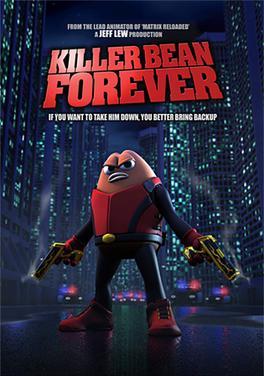 "Could you turn down the music?"
Advertisement:

An assassin named Jack "Killer" Bean is out to kill Cappuccino, a local Mafia boss, who becomes aware of this and sends mercenary soldiers to kill him. Meanwhile, Detective Cromwell of the Bean Town Police Department attempts to gain Killer Bean's help to bring down Cappuccino, but he refuses and tries to go at it alone. Eventually, he learns about conspiracies involving the Shadow Beans, and someone named Dark Bean...

This movie is notable for being an action film entirely starring a cast of beans. As in, coffee beans. It was independently made, designed almost entirely by a single person, with a cast of only five actors, one of them Lew himself, voicing all the characters.

The movie got a mobile game in 2012 that is a pseudo-sequel of sorts, named Killer Bean Unleashed, where the story follows Killer Bean after the events of the movie. A trailer of it can be seen here,

and the film is officially available for free here.

After a surge of popularity in 2019, Jeff announced in January 2020 that a sequel series would be released in late February 2020, later delayed to March/April 2020. The first episode was finally released in September 2020. The series had been cancelled as of Autumn 2021, through the Killer Bean video game has been announced as the continuation by Jeff himself.

The Movie
The Series