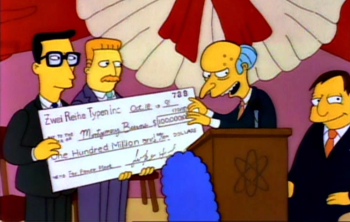 Dispirited that he's spending his autumn years working at the nuclear plant, Mr. Burns decides to sell his beloved plant to German investors, who are planning to get rid of all that is considered "inefficient" with the plant (which means that Homer is again out of a job).

Homer imagines himself in a Land of Chocolate.

Homer imagines himself in a Land of Chocolate.