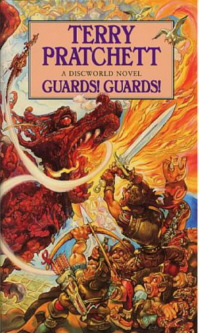 With a purposeful grimace and a terrible sound
It pulls the tacky coronation banners down
They may be called the Palace Guard, the City Guard, or the Patrol. Whatever the name, their purpose in any work of heroic fantasy is identical: it is, round about Chapter Three (or ten minutes into the film) to rush into the room, attack the hero one at a time, and be slaughtered. No-one ever asks them if they wanted to.

This book is dedicated to those fine men.
Advertisement:

The eighth Discworld book and the first to feature the City Watch, one of the most popular of the major character groups/themes in Pratchett's creation, plus the first appearance of C.M.O.T. Dibbler, though as a one-note gag character. It is also notable in that it is the first of the Discworld books in which Patrician Vetinari is the Magnificent Bastard we all know and love, though he is notably more easily frustrated than the stoic of later books. Up until this point Pterry was still working out the character, and aspects of the final product appeared in other books, but Guards! Guards! is the first book in which the character is recognisable as he exists now.

Once upon a time, the Ankh-Morpork City Watch was a proud lawkeeping organisation, but nowadays the Machiavellian Patrician, Lord Vetinari, keeps the peace by the simpler notion of instituting the Guild of Thieves and asking them to police crime themselves. The Night Watch has dwindled away, and now there are only three watchmen left - Captain Sam Vimes, Sergeant Fred Colon and Corporal "Nobby" Nobbs. The fourth, Herbert Gaskin, died a week before the book takes place when, while routinely half-heartedly chasing some crook, he accidentally got ahead of the group and killed by the crook's buddies hiding behind a corner.

They are joined by the newest recruit, Lance-Constable Carrot Ironfoundersson, who was raised by dwarfs in the mountains. A huge, powerful and highly moral and innocent young man, he immediately tries to arrest the head of the Thieves' Guild and clean up the Mended Drum pub - and succeeds. Not only is he tough, he also has a strange... charisma.

At the same time, The Elucidated Brethren of the Ebon Night is planning to summon a noble dragon using a book stolen from Unseen University's Library and use it in a ploy to place a puppet ruler on the throne as king. Almost unwittingly, Vimes and his crew are on the case, with the help of upper-class swamp dragon breeder Sybil Ramkin. But can these unlikely heroes save the city when the dragon decides to take the throne for itself?

Guards! Guards! has been adapted into a play and a graphic novel, and is often cited as the best Discworld novel for new readers to start the series. Notably, Pratchett said that Carrot was originally going to be the viewpoint character, but the structure of the book didn't allow it so he made up Vimes - who is now one of the most popular and complex characters in the whole of Discworld.

Preceded by Pyramids, followed by Eric. The next book in the Watch series is Men at Arms. Very loosely adapted into the Point and Click Adventure Game Discworld.