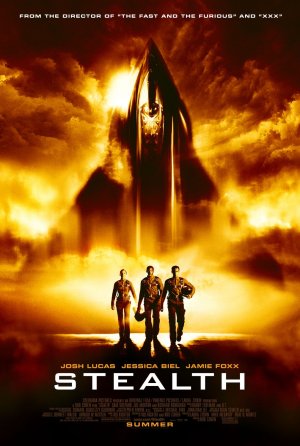 This page is about the movie. See also Stealth Tropes.

The pilots are to take EDI out on a mission and train it. While they're at it, debate rages amongst commanders about whether it's ethical to use artificial intelligences in war, given that although a computer is not subject to the physical limitations of a human pilot and can calculate strategies more quickly; they likewise possess no sense of morality. At least; theoretically... can you guess where this is leading? And indeed, sure enough, with the mission a success, on the way back, EDI is struck by a lightning bolt, thus zapping his circuits, and he develops a moral code. Initially, everything is fine. But then, on a subsequent mission in Pakistan, EDI decides that the decisions of the humans are faulty, and he starts doing his own thing... Now it's up to the three pilots to stop him.