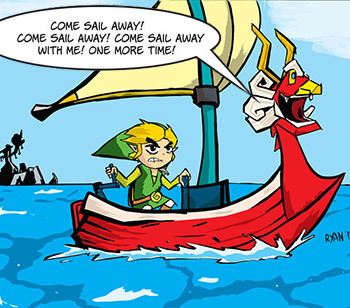 . Used with permission.
"Shit," the ship said to itself.
— Philip K. Dick, "I Hope I Shall Arrive Soon"
Advertisement:

Generally, when these are seen in fiction, they're female thanks to a long maritime tradition. Often, they are present as characters in the form of a Living Figurehead or a Spaceship Girl.

Acting as both a character and setting, the sapient ship is perhaps the best example of the Fisher King, as the environment quite justifiably mimics the ship's mood, health, and situation.

Of course, looked at rationally, it's not clear that it is desirable for a ship to be sapient, at least from the point of view of the crew. If the ship is happy things tend to run smoothly, but upset a sapient ship and you might wind up locked in your quarters or having your life support cut off.

Despite the problems that can arise from the setting having a mind of its own, there are narrative advantages. Having the ship able to take over roles such as pilot, and navigator cuts down on crew requirements (and thus cast size) which in turn cuts down on life support and accommodation requirements, sometimes to the point where a crew may be an optional extra. The level of sentience and independence will determine just how much of an advantage this is.

Not to be confused with Setting as a Character where the ship is just treated like a character by the cast but isn't necessarily alive. Compare Sapient Steed and Sentient Vehicle, which are this trope applied to steeds and smaller vehicles that are used for transport instead of living on. Some Sapient Ships are big enough to be Genius Loci. Spaceship Girl is a subtrope when the A.I. creates a humanoid avatar that is an attractive woman. When this is accomplished by plugging a human brain into the computer, it's Wetware CPU.