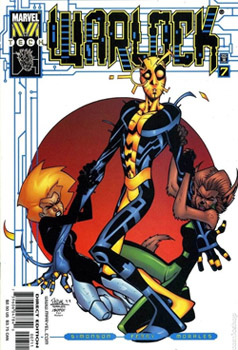 Not to be confused with Adam Warlock from Marvel Comics's other same named comic. For other uses, see Warlock.
Advertisement:

Warlock, a techno-organic alien originally created for New Mutants by Chris Claremont and Bill Sienkiewicz also had a nine issue miniseries of his own in 1999, written by Louise Simonson and illustrated by Pasqual Ferry.The series takes place after Warlock's death and reanimation as Douglock (originally thought to be the combination of previously killed New Mutant Douglas Ramsey and Warlock) and after his departure from Excalibur.

The series follows Warlock, who after learning that he is only Warlock with Doug's memories and part of his being, tries to put an end to the Phalanx infestation he accidentally brought to Earth as well as get a grip of what he has become.While infiltrating a science facility where Phalanx material is experimented on, he meets Hope, young girl with immunity to the techno-organic virus as well as the ability to infect others by touch. Despite knowing that Hope is incredibly dangerous, he can't bring himself to kill her and after they get attacked by guard robots and a group called Psi-cops, Warlock and Hope escape together, along with Hope's infected pet monkey, Chi-Chee.

This starts a journey to keep Hope safe from a former S.H.I.E.L.D. agent named Mainspring who originally kidnapped Hope and experimented on her and teach Hope how to control her abilities and somehow find a way to get rid of the Phalanx before it sends a beacon to Warlock's own race, the Technarchs to come and cleanse the Phalanx infestation and destroy Earth along it.