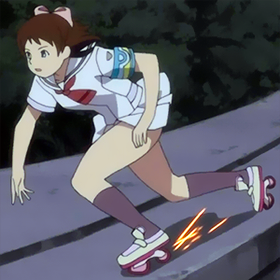 Why doesn't she just use a bicycle?
Advertisement:

Despite how badass motorcycles are, sometimes they're just not quite right for the situation. For one, they're large, they're noisy, you need to stay fully on them, it's hard to fight hand-to-hand and they can't maneuver well in tight spaces. So for some, roller skates are better.

A person using this is very often a kid or has a childish personality, and are also often a Fragile Speedster. If they're in an especially big hurry they can even add rockets for a little extra boost.

This trope frequently occurs in Humongous Mecha. Logically, they are there to make it easier and faster for the mecha to move across reasonably even ground, but also to help lazy animators. The wheels will either be on the feet, or the feet will transform to reveal wheels. They may even have wheels for feet. Caterpillar tracks are common substitutes for wheels. Spider tanks under 4 meters (roughly 12.5 feet) tall will normally feature wheels on the bottom of their feet.

Sometimes they may also be good at ice-skating and, in rare cases, may actually wear ice skates into non-ice places. Which are usually explained by the wearer having ice powers or having advanced tech built into the skates.

A roller skater could run into trouble if they go off the pavement, since the tiny wheels are more likely to trip on an obstacle or sink into soft ground and get stuck. The latter especially applies to wheels on the feet of bipedal mecha, which would create a lot of ground pressure on a small contact area. However, the work may ignore this problem under the Rule of Cool.

Not to be confused with Wheel o' Feet. A form of Travel Cool. Don't expect roller skaters to use helmets unless the work is explicitly marketed to young children, in which case they're practically required to demonstrate proper helmet use.