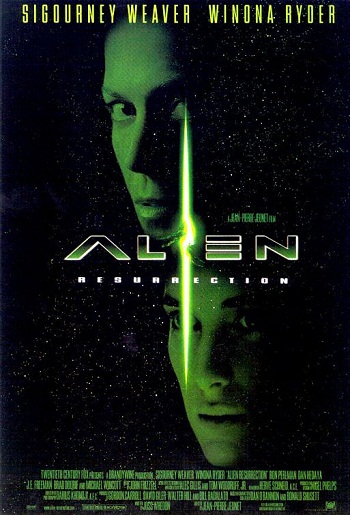 "My mommy always said there were no monsters. No real ones. But there are."
— Ripley 8.
Advertisement:

Alien: Resurrection (1997) is the fourth film in the Alien film series. The screenplay was written by Joss Whedon, and was directed by French director Jean-Pierre Jeunet (Delicatessen, The City of Lost Children) and is his only Hollywood studio-based film to date.

After dying in the previous film, Ripley is cloned back to life some 200 years later on a military research station for the purpose of breeding Xenomorphs in unscrupulous experiments, in yet another attempt to turn them into weapons (although the scientists go on about the other uses). The result is a little less than perfect though, as clones tend to be, and though she looks human, the clone has remarkable strength and reflexes, acidic blood, feral instincts, and lingering memories of her past life - including the knowledge that it is only a matter of time before the aliens break out.

Shortly after a crew of smugglers arrives on the station with a fresh shipment of unwitting colonists for the military to use as the initial alien parasite hosts, the captive adult aliens break out of their pens and begin to run amok. The new Ripley bands with the survivors, helping them get out of the station, but they discover that she's not the pay-off to the experiments - the Queen bred from Ripley no longer requires host bodies to reproduce, and her offspring are horrific half-human, half-Xeno hybrids that cannot be allowed to reach Earth.

The plot breaks the traditions of the series by not including the original Ripley nor the Weyland-Yutani company, explaining that they were bought out by Walmart.

This is chronologically the last film of the 'classic' Alien series to date, as the installments that were produced after this, Prometheus and Alien: Covenant, take place before them.

Annalee Call: [about Earth] It's beautiful.
Ripley: Yeah.
Annalee Call: I didn't expect it to be. What happens now?
Ripley: I don't know. I'm a stranger here myself.