Film / Gorillas in the Mist 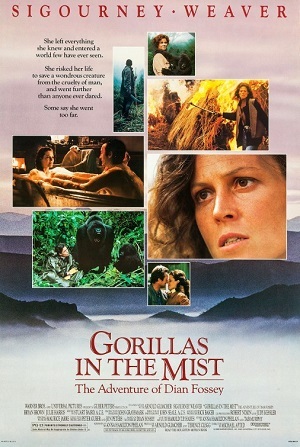 "You like this ring? You want to keep the hand this ring is on? If I see or hear or smell you anywhere near my gorillas, you'll be writing with your other hand and I'll have a new ashtray."
— Dian Fossey
Advertisement:

Fossey was one of "Leakey's Angels", at the time the world's leading researchers in the field of primates, inspired by anthropologist Louis Leakey

. In the 1960s, she traveled deep into the isolated jungles of Rwanda to study endangered mountain gorillas. Fossey devoted her life to ending poaching at the cost of her relationships with the people around her. Her fight became more and more heated, to the extreme ends of confronting the Rwandan government and eventually burning down a poachers' village, which quickly put her in their crosshairs.