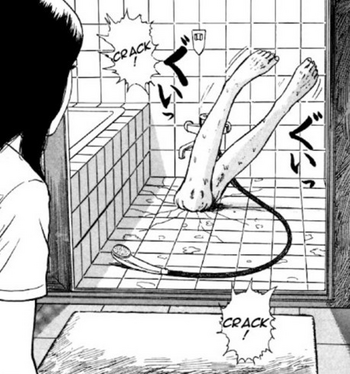 Some things are pipe dreams, but this is just ridiculous...
That's how we lost Torres. Something grabbed him, pulled him through. The hole wasn't big enough for his head, but he still went through, eventually.
— Document 1983-15,

When a square peg is forced into a round hole, the peg gets crushed out of shape. When a person is forced through an opening too small to accommodate them, that person's body suffers the same fate, but it's a lot messier.

Whether yanked into a narrow gap by a powerful predator, sucked through a ruptured bulkhead in space, or crammed into a tiny compartment when their killer is Disposing of a Body, the human form can only withstand so much force before its bones start breaking, its joints dislocate, and it folds up on itself. Scenes where this happens on-camera virtually always employ fake feet on wooden spindles, which swing around to lie beside the victim's head in a way even a contortionist couldn't manage.

Compare Ground by Gears. Can overlap with Dead Man's Chest, when the body in question is lucky enough to not still be alive at the time it's squeezed into a small space. If Cartoon Physics apply, you have Forcibly Formed Physique. The Contortionist often undergoes this sort of treatment without actually dying. Is often one possible method of inflicting a Cruel and Unusual Death.

This is usually a Death Trope, so unmarked spoilers follow.