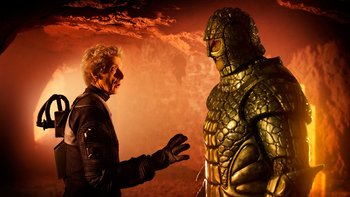 "You don't stand a chance against the Ice Warriors."
"It's a simple choice, Iraxxa. The oldest one in the book. We must live together. Or die together."
— The Doctor
Advertisement:

The one where the definition of Ice Warrior expanded to Ice Warrioress.

The Doctor, Bill, and Nardole travel to NASA to watch as a new probe manages to reveal the landscape that lies beneath the polar ice of Mars... and everyone is gobsmacked to discover the phrase "GOD SAVE THE QUEEN" written in stones there. As if that weren't surprising enough, the Doctor soon realizes that the message was actually written circa 1881 and off the trio goes to Mars to find out why.

When Bill falls down a crevasse, Nardole goes to the TARDIS to fetch rope only for the blue box to travel back to St. Luke's University. The Doctor and Bill, now stranded, soon discover a troop of British soldiers who have an Ice Warrior nicknamed Friday as their servant. His ship crashed to Earth and these soldiers struck a bargain to help repair his ship in exchange for a journey to the Red Planet to mine and claim its precious riches... and perhaps the planet and its people for Queen Victoria and The British Empire, as well. But greed and treachery among the ranks lead to a sleeping Ice Queen, Iraxxa, being awakened to ugly news: she and her entire hive have overslept, the surface world they once ruled has long been rendered a dead empire by the tides of time, and they have seemingly been invaded by the people of Earth. The Doctor and Bill have to find a way to bring these two not so dissimilar warrior races to an understanding before it's too late.

Alternative Title(s): Doctor Who S 36 E 9 The Empress Of Mars