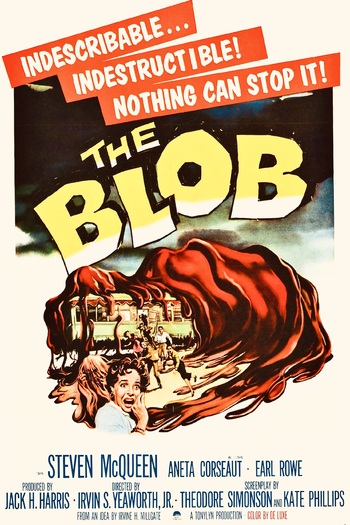 Beware of the Blob!

It creeps
And leaps, and glides
And slides across the floor
Right through the door
And all around the wall
A splotch, a blotch
Be careful of the Blob!
Advertisement:

The Blob is a 1958 Sci-Fi Horror film directed by Irvin S. Yeaworth, about a killer amoeba from outer space. The film is notable not only for its memorable villain, but also for being the first starring role for "Steven" McQueen.

As the film begins, a small meteorite drops to Earth near a small Pennsylvania town. It contains a tiny, jelly-like substance that quickly attaches itself to a nearby hermit, who is subsequently brought to town for medical attention. Unfortunately, the Blob starts growing and soon consumes both the hermit and the medical staff, observed only by a pair of teenagers. Of course, when they try to raise the alarm, no one believes them — until the Blob, still growing and having consumed a garage mechanic in the interim, attacks a crowded movie theater. Eventually deducing that the creature can be defeated only by extreme cold, the town collects all available fire extinguishers and blanket it in CO2, freezing it solid. In the end, the frozen Blob is deposited deep in the Arctic, where it is presumed it will remain frozen.

It spawned a sequel in 1972 and a remake in 1988. The remake uses the original story with a few minor changes.