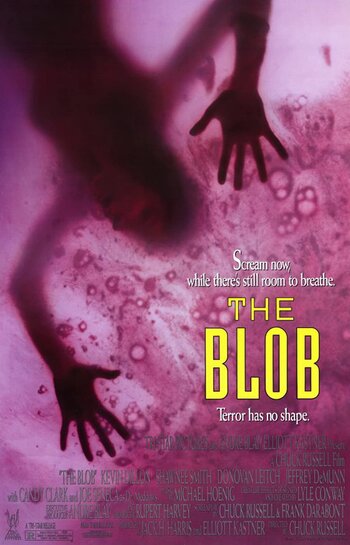 The Blob is a 1988 Sci-Fi Horror film directed by Chuck Russell, who co-wrote the screenplay with Frank Darabont. It is a remake of the 1958 film of the same name.

A meteorite crashes into the forest outside the small mountain town of Arborville, California, where it is discovered by a local hobo. A blob of slime from the crater attaches itself to the hobo and quickly begins consuming him. The afflicted bum soon crosses paths with three local teens: jock Paul (Donovan Leitch), cheerleader Meg (Shawnee Smith), and bad boy Brian (Kevin Dillon). They take the bum to a hospital, where the Blob consumes him as well as Paul and then breaks free to ooze amok via the town's sewer system. Meg tries to convince Sheriff Geller (Jeffrey DeMunn) and other locals of the danger, but nobody believes her and they instead want to pin the recent trouble on Brian.

Circumstances seem to improve when government officials begin swarming the area, fully aware of the danger and ready to combat the threat. Brian overhears their leader, Dr. Meddows (Joe Seneca), admit that the Blob is an unexpected result of a government experiment. The officials place their top priority on recovering the Blob for use as a weapon; all lives in town are of secondary importance.

The Blob continues to attack more and more townsfolk as the government agents begin quarantining the population. Meg is forced to rescue her little brother from a cinema that is attacked by the Blob. They flee into the sewers, where Brian arrives just in time to save them, but Meddows tries to kill them to prevent the truth from leaking. The Blob kills Meddows and emerges onto the city street, now colossal in size and seemingly unstoppable.

The Blob rampages through the street, killing dozens of fleeing townsfolk. Meg realizes that cold is the Blob's weakness, and she helps a group of townsfolk barricade themselves in the town hall using fire extinguishers. Brian arrives with a snow maker truck and crashes it into the blob. Meg sets an explosive charge on the truck and detonates it, freezing the Blob into a pile of crystals. The town is saved, and they plan to gather the Blob crystals to keep frozen before day breaks. But meanwhile, the town's local minister Rev. Meeker (Del Close) has kept a few crystals in a jar and begins preaching about a day of judgment soon at hand.