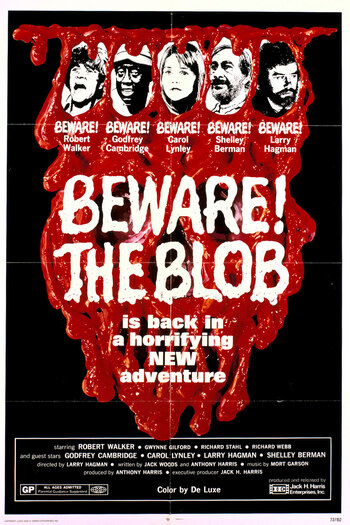 Beware! The Blob (also known as Son of Blob) is the 1972 sequel to The Blob (1958), directed by Larry Hagman and starring Robert Walker and Gwynne Gilford.

A construction crew working on a new Alaskan oil pipeline has uncovered the frozen Blob. Not knowing what it is, the construction foreman brings a small chunk of it home to southern California with him, upon which it promptly escapes, grows, and terrorizes the community, slinking through the sewers. Eventually entering the brand new bowling alley (and attached, still-under-construction ice-skating rink), the Blob is ultimately defeated by freezing the ice rink floor. A decidedly campy film, Beware! nonetheless plays many monster movie tropes dead straight, particularly the Cassandra Truth-spewing heroes and the Obstructive Bureaucrat who runs the bowling alley.