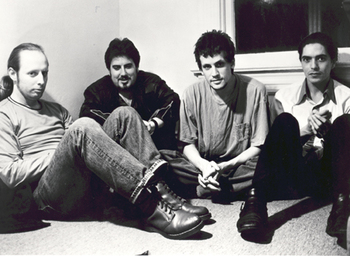 Notable Slowcore band, best known as a continuation for the Mark Kozelek project from The '90s called Red House Painters.

After the Painters recorded what would be their final album, Old Ramon, they were dropped off of Island Records and the album was shelved for 4 years. In 2001, it was finally released by Sub Pop, but the band had broken up from the stressful conditions of the Troubled Production. So Mark got two of his old collaborators back together with him with a slew of session musicians. The sound of the Red House Painters had changed so drastically that Mark decided to rename the project to Sun Kil Moon.

Their first album Ghosts of the Great Highway was released in 2003 to great critical acclaim and record sales for any Slowcore act and for any Mark Kozelek-related project. The next album, a Modest Mouse Cover Album called Tiny Cities, was released to mostly positive reviews in 2005. It was in 2008 that the act got a great deal of critical reception when they released April, a sprawling, folk influenced album. Kozelek followed it up in 2010 with Admiral Fall Promises, on which he was the sole musician. Although the album was met with generally positive reviews, some fans were disappointed in the fact that Kozelek eschewed the layered arrangements that were present on his previous work.

The band's fifth album, Among The Leaves, continues the trend of sparse instrumentation set by Admiral Fall Promises, however, it also featured a more stream of consciousness lyrical approach. Many critics and fans found themselves confused as to what to think of the new album.

In January of 2014, the band released their sixth album, titled Benji, which continued the lyrical tread set by its predecessor. The album has been met with some of the most positive reception in Kozelek's career.

The project's future is currently unknown due to allegations against Kozelek, putting the 2020 release of Welcome to Sparks, Nevada on hold until November. Discussions be taken elsewhere.

Also: Mark Kozelek and Jimmy LaValle of The Album Leaf recorded a collaborative album, Perils from the Sea, in 2013. It was credited to Sun Kil Moon/The Album Leaf for its Japanese release.