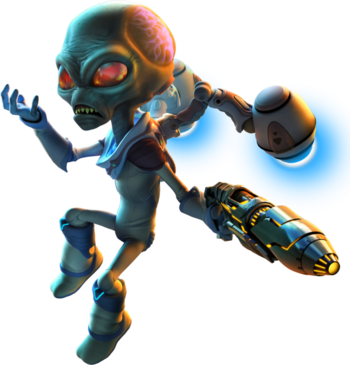 "It's probin' time."
Graeme: Listen, Paul is from-uh, an M-Class planet in the northern spiral arm of the Andromeda galaxy.
Paul: Thank you.
Clive: He looks too obvious.
Paul: There's a reason for that, Clive. Over the last 60 years, the human race has been drip-fed images of my face on lunchboxes and t-shirts and shit. It's in case our species do meet, you don't have a fucking spaz-attack!
— Paul
Advertisement:

An index of fictional works that star, and/or revolve around, beings not native to planet Earth. Note that many of these works may feature many or almost all human characters in main roles, but are set apart by having at least one alien main character.