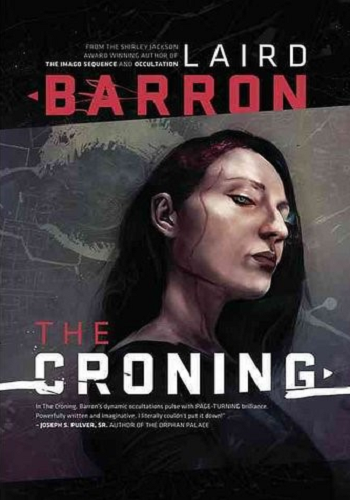 The Croning is a Cosmic Horror Story from 2012, written by American author Laird Barron.
Advertisement:

In the early middle ages, a Spy goes on a mission given to him by his sister, the Queen. He is to track down a strange, misshapen dwarf, who has made a deal with the Queen; she must learn his true name, or he will take her firstborn child as payment for a favor he once did her. The mysterious dwarf proves much more illusive than originally thought, and the quest takes the Spy to the end of civilisation at the far edges of the realm, where he discovers something terrible and very old lurking in an ancient temple hidden in shadows of the mountains.

In 1958, Donald "Don" Miller, a professor in geology is on vacation in Mexico City with his wife, Michelle, who is a renowned professor in anthropology, but after a phone call from a colleague, Michelle goes missing. As he attempts to find her, a worried Don is recommended to seek out help from two local retired police officers, who joins Don in his search. But his two companions quickly prove to somewhat unhinged and untrustworthy, and Don finds himself getting involved in a series of increasingly bizarre and dangerous situations in the far outskirts of the city, that culminates in him ending up in a cave in the mountains outside the city, which is rumoured to contain a bottomless pit. Here, he has a close brush not only with death, but also something much, much worse...

In 1980, Agent Tommy Crane of the NSA is investigating a highly strange case, involving the suicide of a mysteriously well-connected entomologist named Dr. Louis Plimpton. Before he died, Plimpton relayed a personal message to Crane, which eerily reminds him of something from his childhood.

In the present, a much older Don Miller is enjoying his retirement alongside Michelle in the countryside outside Olympia, Washington, where they are living in a old, rustic house, that once belonged to Michelle's family. While everything seems peaceful and idyllic on the surface, the ageing Don notices much to his concern that he is struggling with an unexplainable fear of darkness and occasional gaps in his memories, especially regarding some enigmatic event that happened to him in 1980. During a visit from him and Michelle's adult twins, outlandish things starts happening around the house, and Don's fuzzy memory starts clearing up, as he soon begins to unearth some dark secrets about his wife and her family.

Tying all these strings together is the Children of the Old Leech. They always have been lurking in the shadows, and been with our species from time immemorial. And they love us.