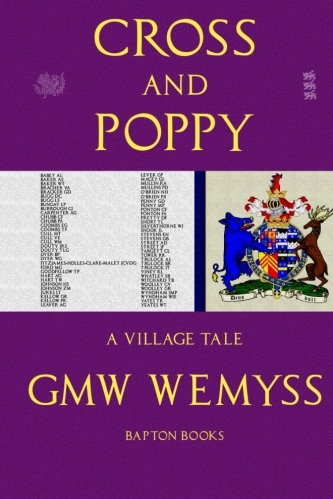 Even in Arcadian Barsetshire, The Dead Have Names. Every Remembrance Sunday.
Advertisement:

2013 British (… very, very British) novel by GMW Wemyss: the first in the Village Tales series. A cozy, witty-as-hell Slice of Life tale set in The West Country: pure Barsetshire … if Barsetshire were updated to account for today's problems and concerns.

The Woolfonts – Magna, Parva, Abbas, and Crucis – are placid, chocolate-box villages, genially presided over by the Duke of Taunton (who's not as much a P. G. Wodehouse character as he pretends) and home to gentry, worthy rural folk, and a few celebrities: Edmond Huskisson, a retired footballer; Brian "The Breener" Maguire, Irish-born former England cricketer; celebrity "Hipsta Chef" Teddy Gates; the Hon. Gwen Evans, who runs the local racing stud; and their absurdly gorgeous friend Mr. Sher Mirza MA, a British Pakistani who teaches at the local Free School and is a well-known musicologist. All that the villages need is a new, Anglo-Catholic rector for the joined parishes. And the Duke – over the opposition of the Bishop; Canon Judith Potecary; and His Grace's old school-fellow (prepper, Eton, and Oxford), the Archdeacon – gets the rector he wants, though not without open ecclesiastical warfare.

Cross and Poppy provides examples of: