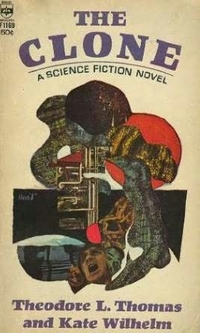 The Clone: A Science Fiction Novel was a 1965 science fiction/horror novel written by Theodore L. Thomas and Kate Wilhelm. It is based on an earlier short story of Thomas' by the same name. The year it was published, it was nominated for a Nebula Award, but lost to Frank Herbert's Dune.

A monstrous entity is accidentally created when four different ingredients - muriatric acid, trisodium phosphate, silica gel and hamburger meat - combine in a Chicago sewer catch basin. It starts as a microscopic organism but swiftly grows into a huge green blob which Thomas and Wilhelm insist on calling a "clone."

The "clone" quickly begins spreading through the sewers and aqueducts beneath Chicago, soon flowing up into people's homes through their drains. It absorbs living and nonliving matter on contact, converting everything into more of its own tissue. At first only a minor threat, it soon grows so huge it threatens the entire city and drastic measures must be taken to stop it from getting into Lake Michigan and spreading further.

The novel is interesting for its borderline omniscient narrative style and lack of a true main character. Instead, the story, when it isn't describing the "clone" attacking and absorbing various people and things in a detached, almost documentary writing style, follows multiple characters and subplots, all with different conclusions (and some with none).