Literature / Chronicles of the Emerged World 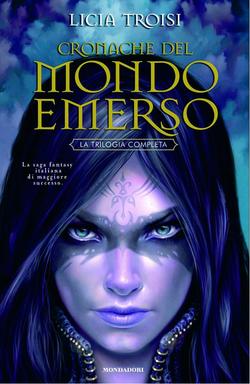 The Chronicles of the Emerged World — Cronache del Mondo Emerso — is an Italian fantasy saga written by Licia Troisi, and published also in several other European countries (Sadly, it is not yet out in the UK.)

The trilogy is set in the Emerged World, where Aster the Tyrant is launching a full-fledged war in order to take over the Eight Lands, and has almost taken control of all of them. The young girl Nihal, a half-elf (half-elves are considered a whole race in this setting) lives with her friends and her adoptive father in the Land of Wind, until the Tyrant invades and conquers it, destroying its cities and enslaving its people. Armed with the precious Black Crystal sword and, along with her friends Sennar and Laio and her master Ido, she begins her journey to become a Dragon Knight and fight the Tyrant and his army of monsters before it takes over the remaining free lands and more.

The trilogy's titles are Nihal of the Land of the Wind, The Mission of Sennar and The Talisman of Power. The series was well-received by readers and became quite popular. It also spawned two sequel trilogies known as The Wars of the Emerged World and Legends of the Emerged World but they did not reach the previous series' level of popularity.

The Chronicles of the Emerged World contains examples of:

Alternative Title(s): Nihal Of The Land Of The Wind