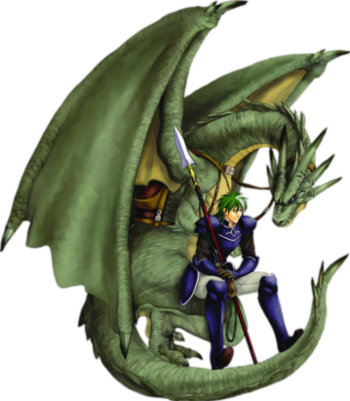 Awesome.
"The holy dragonmen, trailblazers of a new age
Riding the universe to force the evil to its cage."
— Running Wild, "Dragonmen"
Advertisement:

Let's face it: you can't get much more badass than a Dragon. They're huge. They fly. They breathe fire. They have weapons sticking out of nearly every part of their body. They're really, really smart. They're brutal and merciless in battle. They live for eternity, or at least a few thousand years, during which they only get stronger. They wield magic. Their tough scales make them both pretty and pretty Immune to Bullets. (Well, it really depends.)

As the most well-known mythological beast, dragons have always been treated like nuclear bombs in times of swords and wooden shields — a quintessential incarnation of prestige, as well as terror.

Somewhere along the line (1967, to be exact), somebody got the idea that maybe these vicious, bloodthirsty beasts don't have to be so evil after all. Maybe underneath all those fangs and claws, they're just gentle, misunderstood creatures who might just be willing to fight on the side of the good guys if you're lucky. In fact, maybe they're just looking for a friend.

Thenceforth, there came the idea of a Dragon Rider, a human (or humanoid) who is so mightily goddamn badass he can ride on the back of these beasts, often as a steed into battle. The concept exploded and gained popularity among fantasy authors, and now can be seen just about everywhere in modern fantasy literature and games.

Dragon riders are usually characterized by a bond with the beast they ride which results in a synchronous relationship between the two, a telepathic link, and no possibility that the two could ever be separated from each other without drastic consequences. They'd better get used to each other's company — they're stuck together for life!

The plausibility of this trope depends on how intelligent the dragons are in this setting as well as what exactly the rider brings to the table. In some cases, the human might fill some gap in the dragon's own abilities — an old-fashioned, unintelligent dragon might need a rider for direction, and a non-firebreather might benefit from having a wizard on its back — but most dragons are so all-around awesome that the human is redundant. That legendary magic sword of yours isn't going to do much good up there either unless it's really really big, in which case the dragon himself might use it. If the dragon is just a particularly awesome, non-sapient animal, then the relationship is more comparable to that of a horse. In the case of a sapient dragon, it might be letting the human ride on its back not so much because it needs their help in combat, but just because the dragon and human are friends.

Much to the chagrin of some fans of old fashioned dragon lore, even the more intelligent dragons are usually subservient to their riders (or at least seem to be/are treated as though they are).

This trope will keep coming back because dragons are cool and a dragon you can fly on is cooler.

May sometimes be called wyverns, a different dragon-like mythical creature. Most stories that have both depict wyverns as being smaller and less intelligent (often non-sapient) compared to "true dragons", explaining why they're able to be tamed and ridden by humans.

Compare Dragon Knight, Giant Flyer, Beast of Battle, and Horse of a Different Color. Contrast Shoulder-Sized Dragon, a dragon that rides you! Not to be confused with the former name of the manned version of the SpaceX Dragon capsule (now called Dragon 2

), or with Interspecies Romance. Dragon Riders are often also Dragon Tamers since their line of work often involves training their mounts.