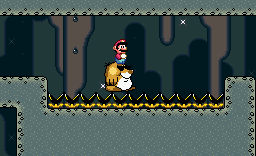 Mario goes on ahead.
"Neuron is a friendly guy,
Use his head to ride up high."
— Yoshi's Story
Advertisement:

In Video Games, enemies often have immunity to environmental hazards, usually floor spikes or Lava Pits; the player, on the other hand, is not so fortunate. So what can you do? Why, hop on the enemy's head and ride it across, of course. Most of the time the enemy won't even care that you're hitching a ride on its head, and will continue to wander mindlessly.

Doesn't work on enemies that you can Goomba Stomp, obviously (unless they function as Goomba Springboards). That, and Collision Damage has to be disabled for the top of this specific enemy. Compare and contrast Goomba Springboard. Not to be confused with vehicles made out of craniums.