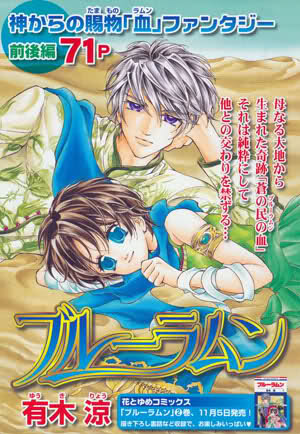 "Doctor, doctor, gimme the news, I got a bad case of lovin' you!"
Advertisement:

A 3-volume manga by Yuuki Ryou, Blue Ramun was initially serialized in Melody manga anthology magazine between 2004 - 2006 before being collected in tankobon format. It follows the adventures of Jessie, a girl with healing powers who works as a doctor in a desert empire.

Jessie was born into the nomadic Blue Ramun tribe, whose magical blue blood can heal nearly any ailment or injury. Long ago the Blue Ramun people were nearly hunted to extinction for the properties of their blood, saved only by the last-minute intervention of the Silkdeep Empire. Now, the few remaining members of the tribe dedicate their lives to serving as the revered "Blue Doctors," ministering to the citizens of the Empire with their sacred blood. Having just turned 15 and completed her medical training, Jessie is sent to become the resident healer of the Lezak District of Fargain, Eastern Capital of the Empire.

Lezak is different from the small, close-knit caravans Jessie grew up in, and the demands of caring for the community at large begin to take their toll on the girl's mental and physical health. Fortunately, Jessie isn't alone in her work: Randy, the day-drinking healer-priest of the church is there to aid her in the clinic; and the dashingly handsome but emotionally guarded Captain Eagle of the City Guard has taken a particular interest in her wellbeing.

As Jessie settles into her role as the Blue Doctor of Lezak, the peace of the Silkdeep Empire is threatened by the actions of the Garicalege — a group of Fantastic Terrorists who traffic in the blood of the Blue Ramun tribe. Their leader is the enigmatic Rowan, a man who has made himself into a monster in pursuit of power. Jessie finds herself thrust into the middle of the conflict when Rowan turns his attentions on her and the Lezak district.

Long-buried secrets will come to the surface and old wounds will be reopened as the simmering hostilities with the Garicalege boil over into open warfare. Everything Jessie knows is called into question when connections between herself, Rowan, and Eagle threaten to tear her world apart. Jessie's blood may have the power to heal — but can Jessie's spirit overcome the trials ahead of her?