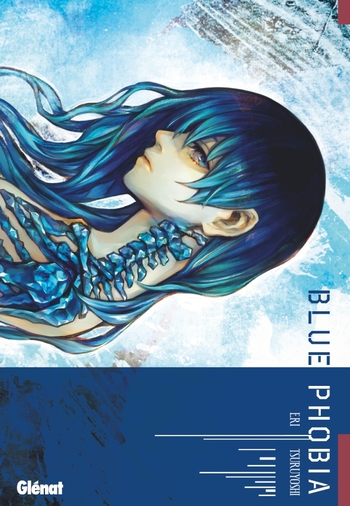 Blue Phobia is a 2017 science-fiction manga by Eri Tsuruyoshi, based on a one-shot of the same name.

On an island somewhere in the pacific, a strange blue sea ore is found, coming from blue human skeletons. The ore's attributes make it a precious, valuable resource the world is trying to get their hands in, however, the ore causes Indigopathy, a disease infected by those that touch it, which will turn the infected's limbs and muscle blue before turning their very bones into more sea ore.

In the one-shot, set in the 1930s, Americans have taken over the island and sent death row inmates and people with life sentences to mine for it and die to become more ore. A soldier named Credo takes a liking for a kid born on the island, whom he teaches to fight in a bid to get him out of the island.

In the serialization, set in the modern-day, an amnesiac man named Kai wakes up being tied down in a lab facility and is rescued by a girl with blue hair and limbs. The two escape to an underground prison where she reveals he was a doctor in that facility and she was a test subject, and they were planning to escape in 3 days to leave the island.