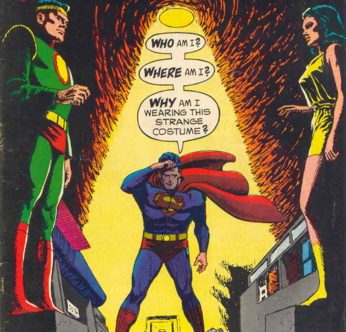 "Who the hell am I?"
— Josuke Higashikata, JoJo's Bizarre Adventure: JoJolion
Advertisement:

Wherein the hero has amnesia. He can't remember a thing, except oddly his own name. Sometimes, although rarely, the hero cannot remember his name. Then someone has to say "Well, we have to call you something!" and they have to make up a name for themselves. (Unless the hero is established to us beforehand — in which case he will often unsuspectingly choose his old name, perhaps to avoid confusing the viewers.) Usually, the Amnesiac Hero:

Amnesiac Heroes are common in RPGs and horror games, and are always the heroes in Ontological Mysteries and Quest for Identity. Even if those plots aren't being used, it's a easy way to get the player up to speed, as they're just being introduced to the setting, while the character lives there and should otherwise know about it already. If collecting the player character's memories by visiting places in the game world is a side objective, it's a Recollection Sidequest.

An interesting thing to note is that, although there are two main types of amnesia, the character usually suffers from retrograde amnesia — the inability to remember things before a brain trauma. Rarely will they suffer from anterograde amnesia, the inability to form new memories after a brain trauma, since this would be harder to work into an adventure story- imagine the hero having to be brought up to speed on the plot every day they wake up.

Compare You Wake Up in a Room, Selective Memory, Fake Memories and I Am Who?. Contrast Amnesiac Villain Joins the Heroes, where the villain becomes good due to amnesia. Gameplay-Guided Amnesia can be a temporary version of this. See also Easy Amnesia, Laser-Guided Amnesia, and Identity Amnesia. Protagonist Without a Past is where this isn't even addressed.