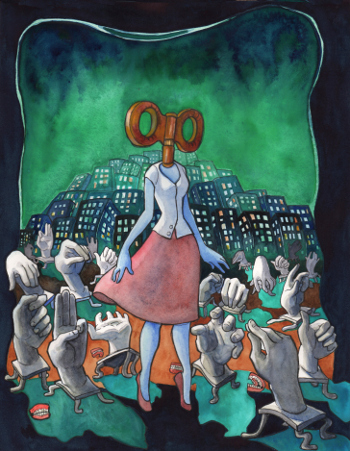 is an RPG Maker game created by indie developer myformerselves

. It serves as a sequel (though probably taking place before, or possibly not) to the developer's first game, Middens, with several reappearing themes and characters.
Advertisement:

Set in the same surreal dystopian setting as Middens, you play as Gingiva, a young woman with an old fashioned clock winding key for a head, who is essentially an enslaved automaton factory worker. The story begins with the "Holy Mother Most High" requesting your presence; when you speak with her, she accuses you of slacking off in your work, and has you thrown in prison.

However, in your prison cell, you meet with a sentient, disembodied mouth referred to as "the Chatterteeth" who helps you escape. Now on the run from the evil corporate executives, you must make your way through a bizarre, corrupted world filled with danger, in a quest to regain both your freedom, and your humanity.

Gameplay is relatively simple; there are no shops in the game, so there is very a finite, set number of items that can be collected around the game world (they all look like sheets of paper being blown around). The protagonist can restore her and her allies' "Vim" and "Verve" ("health" and "mana", basically) by twisting her head key around. There are very few friendly creatures in the game; combat is turn based, with experience points earned from defeating monsters.

Early on in the game, you can acquire a party member to help you on your journey, a TV with legs named "Himmler". Later on, you will acquire a third party member; depending on whether you take the ferry or the train to the Rift, you will get a sentient worm named "Vermillis Maximus", or an animate sculpture named "Kharms". You can also find fleas scattered around the game world, which can be temporarily recruited as a fourth party member; after a seemingly random amount of time, they leave the party.