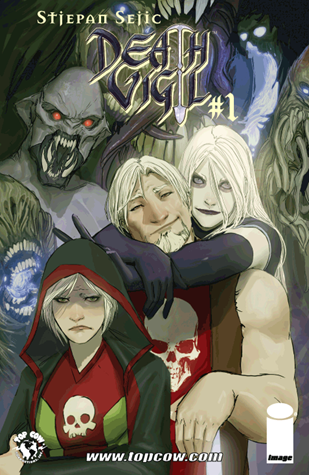 Welcome to the "Dye After You Die" Club
Clara: Okay, real quick. Jon killed me! I was brought back by the Grim Reaper, who is a very nice lady. I joined her group of immortal warriors and am now fighting interdimensional monsters and the people who control them!
Jane: Well, fuck you too!
— All you need to know
Advertisement:

Death Vigil is a action-horror-comedy comic written and drawn by Stjepan Šejić, of Witchblade and Sunstone fame. It began publication in July 2014.

Our story begins with a man named Sam Lewis, who died trying to rescue two women from a mugger. But when The Grim Reaper showed up, instead of passing on, he was recruited into the Death Vigil - a group of fighters under the Reaper's command who protect the world from the forces of evil.

In December 2014, Sejic announced that the 8-issue initial miniseries will be followed by a four-part miniseries focusing on how James became a member of the Vigil and first met and befriended Mia, after which the main series would resume as a full ongoing. Poor sales in spite of its critical acclaim, compounded by Sejic's health and technology issues, threatened the second volume. However on December 4, 2015, Sejic posted on Facebook that he would be making one more attempt at the series with a second arc, while early artwork for volume 2 began to be teased in May, 2017.

After a long delay, and brief cancellation due to Sunstone's slipping sales, Sejic announced plans to turn to crowd funding to continue Sunstone and revive Death Vigil, as well as his other dead works. The first chapter of Death Vigil Volume 2 was released on Sejic's Patreon (to patrons only) on December 31, 2019.