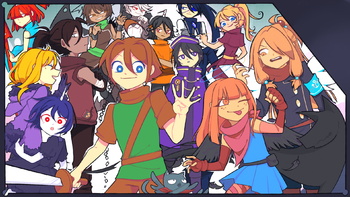 A story about a lost kid.
The nightlights are quite captivating.
Advertisement:

is a webcomic authored by Nights. It's an Interactive Comic, bearing the format of using reader submitted command suggestions to advance a narrative that uses classic RPG Elements.

It follows the story of a lost human boy named Nino, who awakens in an unfamiliar forest. Due to his amnesia, he doesn't remember why he came to the forest, or what he is doing in it.

It's up to the readers to lead him on the correct path and make the right decisions to avoid the dangers around him, while uncovering the story behind how he ended up lost in the monster's world.

where users can comment command suggestions, to be used by the author to advance the story after every update. It also has a Discord server

where update notifications and update discussion, theorizing, and fanworks are shared and produced.