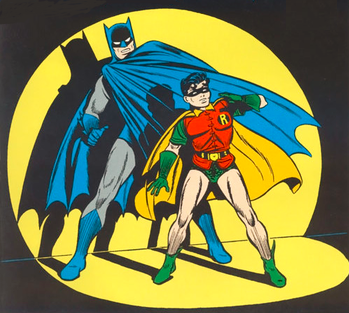 "I don't know how the public accepted all these heroes' infant sidekicks. Besides the Catholic church, no other organization hires 10 year old assistants. Being a superhero is a lot like being a cop, and if we were watching COPS and one of the policemen was chasing a car thief with a kid dressed up as a little cop sitting next to him, we would think that was crazy."
— Seanbaby
Advertisement:

A character, often an adult or sometimes teenager, has a considerably younger Sidekick. Traditionally the kid will often act as The Watson for the main character, and/or as someone for younger audiences to identify with. Sometimes the kid acts as a Morality Pet or as a Wish-Fulfillment personification, which goes some way to explaining the implausibility of a responsible adult putting a young child in dangerous situations. Sometimes the sidekick will be a Teen Genius or Child Prodigy in an attempt to justify their presence, or even a Cute Bruiser. Other times, they're The Load and a Damsel in Distress. May overlap with Junior Counterpart.