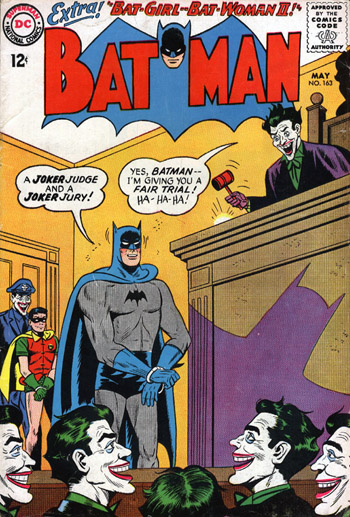 Man, what a bunch of Jokers.
Scarface: Our prosecutor is ready, likewise our fair and impartial jury—
Mad Hatter: Hang him!
Harley Quinn: Shoot 'im!
Killer Croc: Hit him with a rock!
— Batman: The Animated Series, "Trial"
Advertisement:

What happens if a hero is captured by his foes? Sure, they could just kill him out of hand, or toss him into a Death Trap, but if the villain has a sense of the theatrical, a quirky sense of humor, or is just flat-out crazy, he might decide to put his nemesis on trial. If so, the hero will find himself facing a Joker Jury, often overseen by a Hanging Judge.

The Joker Jury is a mockery of a trial held by a hero's foes, where his enemies make up the judge, the jury, the prosecution, and even the defense. The charges are usually ridiculous, such as interfering with the villain's crimes, and the verdict is a Foregone Conclusion. Sometimes, the hero is actually able to defend himself and even win the trial. In that case, the villain usually just tries to kill him anyway.

Sometimes appears as a part of a Dream or Nightmare Sequence, in which case it probably represents the character's guilt over something they have done.

The trope title comes from a story in Batman #163 where Batman and Robin are captured by the Joker and put on trial with the Joker as judge and members of his gang, all dressed in Joker costumes and make-up, as the prosecutor and jury.

See also Jury of the Damned. When the heroes are put on trial by someone besides the villains, it's often a Trial of the Mystical Jury or a Kangaroo Court. Often involves a Villain Team-Up.

Batman's Rogues plan a perfectly fair and impartial trial for the Caped Crusader.

Batman's Rogues plan a perfectly fair and impartial trial for the Caped Crusader.