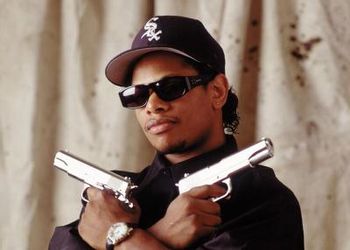 Original Gangsta
You ask why
Am I like this?
cause you wanna hear about shit like this!
So I tell it
How I know it.
Just hope the fuck I don't show it.
— "Eazy — Chapter 8 Verse 10"
Advertisement:

Eric Lynn Wright (September 7, 1964 - March 26, 1995), better known by the gang name Eazy-E, was an American rapper, producer, and record executive from Compton, California. Widely regarded as one of the founders of the gangsta rap subgenre, he rose to fame as the founder and member of the group N.W.A and later achieved critical and commercial success as a solo artist. Eazy-E's vocal style was marked by his youthful, high-pitched voice and his lyrics focusing on the elements of urban street life such as guns, drugs, relations between residents and the police, and sexual activity. He had also for some time hosted a hip-hop radio show on Los Angeles-based radio station KKBT.

Eric Wright was born to Richard and Kathie Wright on September 7, 1964 in Compton, California, a suburb of Los Angeles. His father was a postal worker and his mother was a grade school administrator. Eric dropped out of high school in the tenth grade and supported himself by selling drugs. He was also a member of the Kelly Park Compton Crip during his teen years, and he openly associated himself with other Crips. He later received a high school equivalency diploma.

In 1987, Eazy used the profits from his drug sales to co-found Ruthless Records with Jerry Heller. When Ruthless signees Dr. Dre and Ice Cube wrote "Boyz-n-the-Hood", Ahmed Saaoud and Eazy-E formed the group N.W.A with Dr. Dre and Ice Cube. (DJ Yella and Arabian Prince were later added.) In this period, Ruthless Records released the compilation N.W.A and the Posse (1987), and N.W.A's proper debut Straight Outta Compton (1988). One month later, Eazy-E released his first solo album, Eazy-Duz-It. The album sold two million copies, certifying it as a double platinum album, and spawned the hit singles "We Want Eazy" and "Eazy-Er Said Than Dunn". The album was produced by Dr. Dre and DJ Yella and largely written by Ice Cube, with contributions from MC Ren and The D.O.C.. In March 1991, Eazy-E accepted an invitation to a lunch benefiting the Republican Senatorial Inner Circle, hosted by then-President George H. W. Bush. A spokesman for the rapper claimed that Eazy-E supported Bush for overseeing Operation Desert Storm. On the final N.W.A album, Niggaz4Life (1991), some of the lyrics provoked outrage from many liberals and conservatives alike. According to Eazy he's not a Republican. He claimed he just donated 15,000 dollars for a million dollars worth of press. It still didn't stop people from calling him a sell out. Particularly WillieD of the Geto Boys.

Disputes about money caused N.W.A. to break up in 1991, as it was thought Eazy-E and Jerry Heller were stealing money from the group. Ice Cube is believed to have left N.W.A. for this reason, which he later referenced in his diss song, "No Vaseline". Subsequently, Eazy-E and Dr. Dre started feuding - a feud that grew to embroil most of Ruthless Records and Dr. Dre's new label, Death Row Records with Merrill. Eazy-E released two Extended Play's during this period, 5150: Home 4 tha Sick (1992), and It's On (Dr. Dre) 187um Killa (1993), the latter was a response to Dr. Dre's The Chronic (1992).

On February 24, 1995, Eazy-E checked himself into Cedars-Sinai Medical Center in Los Angeles with what he believed at the time was chronic asthma. Following comprehensive tests, it was discovered that he was suffering from AIDS, and his condition deteriorated rapidly. On March 16, he publicly announced his illness, and during the week of March 20, already having made amends with Dr. Dre and Ice Cube, Eazy-E drafted what would be his last message to his fans. On March 26, 1995, one month after being admitted into the hospital, Eazy-E died at the age of 30. On his death bed days before, Eazy married long-term girlfriend and mother of his child Tomica Woods, and she inherited his share of Ruthless Records. He was buried at Rose Hills Memorial Park in Whittier, California in a gold casket.

In November of 1995, shortly after Eazy-E's death, Str8 off tha Streetz of Muthaphukkin Compton was released posthumously. The album was set to have up to 60 tracks on two discs, but Eazy-E died before he could finish it.

Don't trope me boy, cause I ain't said shit: