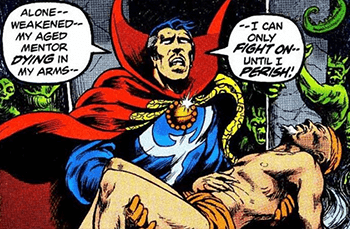 "Well, as an older mentor figure, the most likely scenario is that I'd return only to be randomly killed by an enemy of yours so that you can cradle my dying body while swearing revenge — so don't take it personally if I say that I sincerely hope we never cross paths again."
— Julio Scoundrèl (to Elan), The Order of the Stick
Advertisement:

A hero's mentor dies, often to further the development of the hero or make the villain appear more despicable and imposing.

Being the Mentor is never an easy job. Fighting the Big Bad yourself and stopping The End of the World as We Know It is tough enough as it is, and you would know. Now you have to do that and take this Naïve Newcomer under your wing and teach them the ropes of herodom.

If you don't have to convince The Chosen One who just wants to be normal to grow a spine and accept the Call to Adventure, you have to convince your blindly excited and dangerously eager young pupil that You Are Not Ready to learn the Dangerous Forbidden Technique. When you try to protect The Hero from the Awful Truth, you end up facing their Rage Against the Mentor. If they're an orphan, you have to find them a set of Muggle Foster Parents while keeping social services in the dark. You have to endure accusations of insanity when you're trying to teach your charge that Your Eyes Can Deceive You, give them advice on how to tell a love interest "It's Not You, It's My Enemies," and keep a close eye on them 24/7.

And what is your reward for all this patience and effort?

Yes, there is a 90-100% chance that the Cool Old Guy who has stood by The Hero's side through thick and thin since the first episode/chapter/installment gets offed before the climax of the story. He might get an Obi-Wan Moment if he's lucky. He's just that cool: Too Cool to Live. It's necessary for The Hero's development — can they rise to the occasion and save the day without their teacher holding their hand? Are they ready to accept the torch?

If the student is lucky, their Mentor will stick around as a Spirit Advisor. Either way, expect them to retreat into a Heroic BSoD for awhile, possibly mumbling "It's All My Fault," before the Unstoppable Rage kicks in and the villain responsible pays. They needn't dwell on it too long, though. It was probably all part of the plan.

This is one of the hardest deaths for an audience to accept but ironically, one of the types most likely to stick even if coming Back from the Dead has been done before. An alternate plot involves the Missing Mentor, whose removal from the story (albeit alive and well — we can assume) still prompts The Hero to take on his greater responsibility.

Compare/contrast Dead Sidekick. Maybe the result of Opposed Mentors. Not all mentors fall into this, of course. A great number, if not most, of those that don't fall to the hazards of the occupation eventually turn out to have been a Broken Pedestal; then the inevitable death is either a particularly emotionally charged hero-kills-villain or Redemption Equals Death instead. Then posthumous character development can turn them into a Rebuilt Pedestal.

Since this is a Death Trope, expect plenty of spoilers.